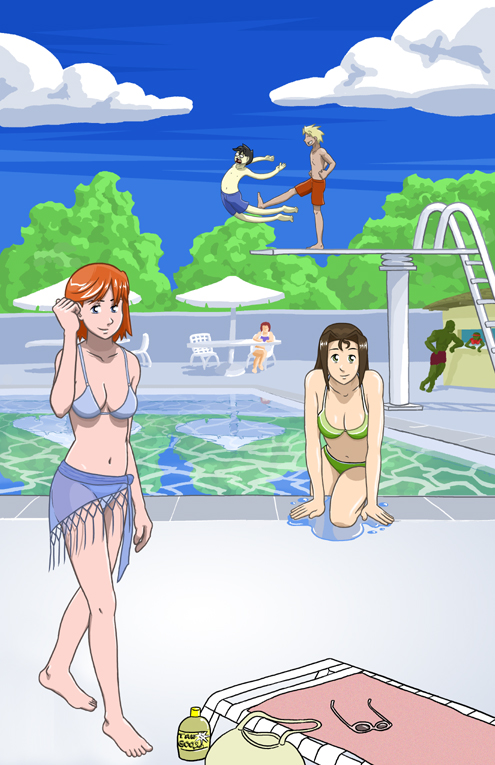 this is at a little more than half the full size. backgrounds have always been my bane. i'm not done with this image, but i figured asking for advice early can't hurt. i'm particularly concerned about the perspective and the water both in the pool and especially the puddle 'neath the girl. any other wisdom on any other aspect would be great too. i've really put a lot of work into this and i'm willing to put in whatever it takes to make it as good as i can but i need help! please!
Last edited by Justin on Sat Feb 18, 2006 5:49 am, edited 3 times in total.
-Justin

Well, that green guy caught me off-guard. It's not bad, just kinda a slap upside the head, "Pay attention!"

The pool looks Hockney-ish. Whether that is good or bad is up to you.

I notice that you have neglected to provide shadows for the girls in the foreground. That is a no-no, at least considering that the deep background figures have detailed shadowing. However, the BG shadows are inconsistent. Look at the table on the right, then look at hte diving board ladder. (They're going opposite directions.)

Finally, the colored outlines for the girls(which were really a great idea) should probably be a consistent style choice throughout the entire picture. Although they're obviously the focus, I'd do some more work on that.
Top

Pretty much ditto to everything that Threshold said. I would also suggest lightening the sky... I think. Right now it seems too dark to me and it makes me really uncomfortable. Haha. And yeah, definitely add shadows to the foreground figures.

thanks guys! do you mean i should do the "color hold" (as i've heard it called) on the chair and stuff in the foreground, or that i should draw lines for everything else in the picture?

is it the black guy on the right? i'm not color exactly blind, but i guess i mix up certain colors pretty easily if they're similar in tone... i don't know.

i've never heard of hockney, but google has. i dunno if i like it or not.. i searched and searched for an illustration of water that i liked but didn't really end up finding one that fit what i want, so i just winged it. if you know of any great illustrations with water i'd love to see them.

thanks for the other tips too! i knew about the shadows in the foreground, i was just tired and lazy and wanted to post this already so i could start getting feedback. 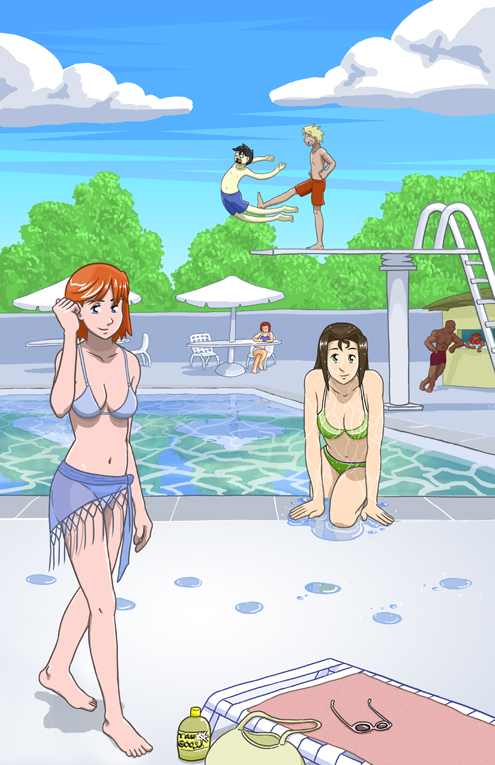 so i did a lot more work on this tonight. what do you think? i sorta guessed on the shadows, i hope i'm not far off, and is that guy still green or did i find a suitable brown? i wanted something to activate that big empty space in the lower part of the composition so i put footprint puddles, how does that come across? pleeease let me know what you think, thanks!
-Justin

I'm not sure what you mean by "color hold," but yeah, basically I was suggesting adding outlines with appropriate colors (read: not flat black). Now the style is def. more consistent now, so that's good IMO.

I actually laughed when I saw the explanation. 'sLike, "haha, I didn't know black people were from Mars!" (please don't shoot me.

I avoid drawing water like dirty puppies avoid the real thing. Pools are different than lakes, which differ from the ocean, which is not at all the same as a bathub. etc. ad infinitum
Best photo I've found so far (where so far I've been looking for five minutes.) I bet you've seen it, but w/e.

With the shadows in the bottom left: Honestly, it's just not very good compared with the rest of the shadowing work. Further, the body shadows don't seem to agree with the ground shadows right now. The girl getting out of the pool could still use some shadow as well.
About the footprints: Water on a pool deck doesn't behave like that unless the deck's tiled. It should prolly soak in more, and retain a somewhat more foot-like shape. If that doesn't sit right with you, try a sequence of small puddle-big puddle to suggest the heel and then the rest of the foot. Toeprints are good too.
Oh, and I noticed the water you added to the girl getting out. It's a good idea, and I like the way it works. I suggest, however, changing the color of the water to blue. The reflection details are something I only noticed when I went fullview, great work there.

Good stuff. I'm glad to see it coming along so well.

delete/repost:hit submit instead of preview
Top

Looks better. The sense of space is much improved. With the Incredible Hulk there, I think you could actually try giving him a bit more green now for the sake of depth. Though obviously not as much green as he had before.

And I think the water on the girl should be white not blue- because under those conditions (i.e. not reflecting the sky) it wouldn't look blue.
Jonathon Dalton

The style is cool~ kinda reminds me of Rod Espinosa's work! Hmmm... agree with everything said above, the newer version is more unified although I do miss that really dark blue sky! XD The only crits I could add I suppose is... maybe have the footprints meander a bit so it's not such a cold line and that the action that's happening in the background could be smoother. Like if there was more distance between the two or... I'm not sure. Maybe if the guy in blue shorts was slightly tilted counter clockwise? I could be wrong here so take my advice with a grain of salt >_<
Top

thanks for all the comments everyone, it really helps me a lot! 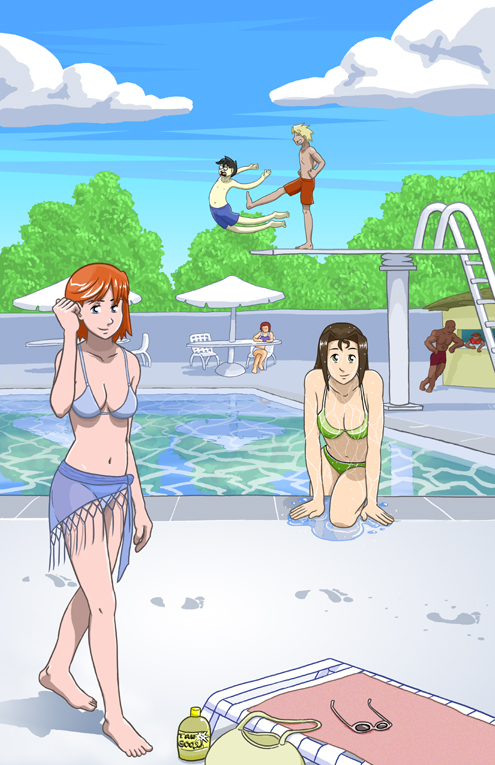 so this is only slightly different. i tilted that guy a little like you suggested, amy. better? also i tried to do footprints as you described threshold, but i dunno how i feel about them.. i think i liked the prior version better asthetically, but i do understand what you were saying, that the water wouldn't behave like that.. hmpf, reality should bend to my will >pout< i also tried again on the foreground shadows, i don't think i like the gradient, but i also think i'm still having a lot of trouble figuring out just where the shadow should be in the first place... hummm...
-Justin

i got around to doing a little more to this last night. i tried again on the girl's shadows, and i changed the clouds. 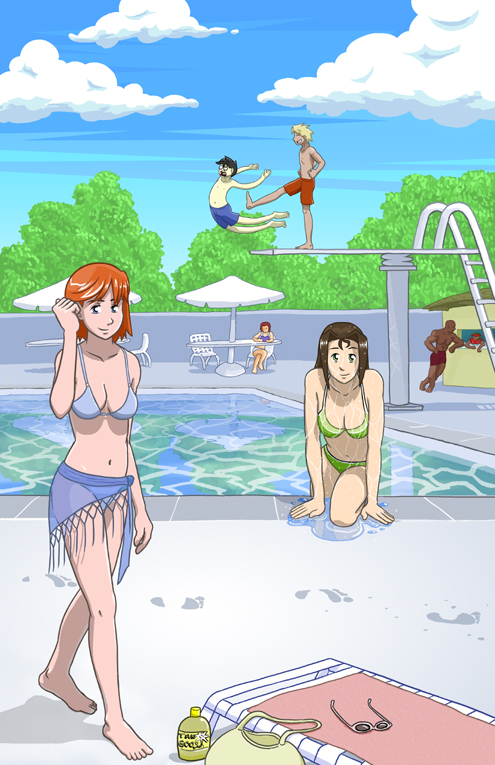 any more crits and comments would be awesome, i think i might still need some help figuring out those shadows

thanks for looking.
-Justin

The shadows still seem a little awkward. Good work on the legs, but I think you lengthened the breast shadows unnecessarily. Also, you're missing shadow on the side of the body.
Try this, just as an experiment: assume a light source in your upper left corner, and trace a ray through that and striking the peak of the bridge of her foot. Then trace lines parallel to that to figure out where other parts of the ground shadow go. use the contours of the body to decide where to put receded body shadows. You're on the right track here.

It's awesome that you're investing a lot of thought and time into improving this piece. I feel lazy by comparison.

Anyhow, I'm posting this because as far as art goes, it's much easier for me to show stuff that to use just words. I also realize that this is pretty much a new image (i mean, i cropped like 1/3 off). It's very rough but hopefully it shows some compositional ideas that you might get some use out of.

For this image, because I am a straight guy and based on your original composition, the two girls seemed to be the most important parts of the image. I tried to compose the picture in a way that drew the most attention to them and moved the eye around.

One of the biggest ideas in composition is contrast. Your eye notices contrast more than anything else, especially contrast in value. I like a lot of your original palette and I think it did a good job in staging the two girls (their hair is very attention-getting.) But you might also notice that the muscle-y guy is very very dark and his background is very very light. If he's not important to the image, it might be too distracting.

In fact, nearly everything in the picture I considered less important I put into shadow. It's easier to look at when there's fewer things to look at. There's also the idea of grouping values, which means making things similar in value. All the stuff in shadow groups together, but you can still pick out details if you try, you don't lose information. Similarly, I knocked back the trees so now they're closer to the value of the sky and the umbrellas. Now the girl's head really pops out against the background. I did the same thing with the pool, although that's a little harder to tell.

Remember, all this is about what you want your audience to look at. I want the audience to check out the hot girls, so the ladies get all the contrast and attention-getting tricks.

You'll notice I changed the color of her swimsuit.

Not so much that I'm a big fan of red, but look at your image -- it's dominated by that shade of blue. Her swimsuit could almost be camouflage. I made it a very bright red to go with her hair, and also because it pops her out against the blue.

What's another way to make the audience notice them? Well, by putting everything in shadow, it kind of flattened stuff out. So I decided to make the girl a little more 3d by putting more form shadows on her. Keep in mind, REALISM IS NOT THE POINT. I'm not putting shadows just because they would actually happen -- I'm putting them to make her seem more 3d against a 2d background. WHAT THE VIEWER SEES IS THE POINT. The modelling and contrast on the other girl works well, so I didn't do anything with her.

Anyway, sorry for the long post, I hope some of this helps. If you don't like any of the changes I made, feel free to disregard what I said. We're all students of art here and we all have different ways of exploring it.

thanks so much guys! i made a few changes based on your input. i don't want to crop the image cause i like those clouds and i need the guys on the diving board (they're main characters in my comic), and i personally am fond of that vivid green i have for the tress so i didn't mess with the contrast much. mostly what i did was alter a lot of the shading. hum, i forgot to try different colors for that swimsuit, perhaps that's something else i should do, but i think i'm pretty much done with the image, unless anyone still has some major qualms or quick touchups they want to point out to me. again thanks a million-billion to everyone who has helped me with this, it's really been a growing experience i think 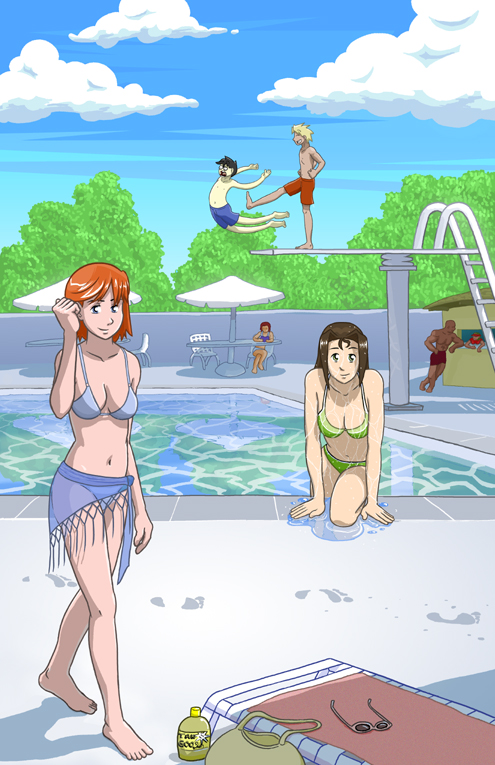 Users browsing this forum: No registered users and 32 guests