Some of the best SciFi I've seen/read in any medium and that for over 30 years!
Interesting characters and they found always intriguing ways to include current topics in their stories, from nuclear angst (Cité des eaux mouvantes) to the battle between progress and nature (Brooklyn station, Terminus Cosmos and Métro Chatelet, direction Cassiopée), arms dealers (Armes vivantes), modern entertainment (Cercles du pouvoir) and the imprtance of oil (Orphelin des astres and Otages de l'Ultralum).

I was lucky that the series was translated into German.
Rather surprising that they only started to translate it into English last year...

If my (bad) French didn't fail then the authors are preparing the end of the series with a trilogy, of which the first volume was published last year.

Definetly worth trying to improve my French...
Top

This looks interesting. Just looking at the preview images, I think you might like The Ballad of Halo Jones by Ian Gibson and Alan Moore.

These books are great! I've been reading them (in Dutch) since I was 10 or so. Since then I've been looking forward to every new book (takes a few years every time).

They really introduced me to comics and science fiction

And I'm in love with Laureline: 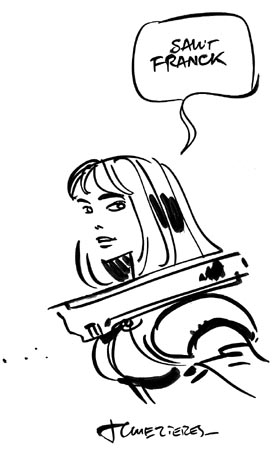 Coppertop wrote:Since then I've been looking forward to every new book (takes a few years every time).

I know what you mean.


And I'm in love with Laureline

We all grew up with Valerian here, it's a pretty amazing story with strong characters. Quite a bit old, it has become a classic and it's still one of the best Sci-Fi series we have, if not the one. It was really big inspiration for the book we made last year.

I saw some pics of the TV show made by the japanese few monthes ago, and it was pretty awfull and totally disrespectful. But they're just few pics, so I cant't judge before seeing it.

Here are some pics that looks better than the old I've seen :

And HERE, you will find pics from a pilot made in 1991 for A TV series never done.
Bannister.
Top

I was lucky that the series was translated into German.
Rather surprising that they only started to translate it into English last year...


What's this about English translations?? Can you provide any more details? I've got a couple of old english editions from the 80's or so. Is someone doing fresh versions?

I didn't know that they were translated that early (80's).

This one is from 96 but it's not available anymore
http://www.amazon.com/exec/obidos/tg/de ... ce&s=books

The rest of the search results (Amazon) comes up with either the French originals or the German translations.
Top

Unwen wrote:I didn't know that they were translated that early (80's).

I saw that on Amazon but I can find no mention of it on the publisher's site. Strange. The two I have are "Ambassador of Shadows" and "Welcome to Alflolol", both from '83.
Top

Th IBooks site doesn't seem to be quite up to date.
Copyright is only till 2002 and the coming soon section has book scheduled for June 04, Valerian was released December 2004.
Top

HAH! about two weeks ago i saw that in the 75% off bin at my local comics shop, so i jumped at it. i think i only payed $4 and some change for it. Man, what a steal. I've always enjoyed Mézières work. i haven't read it yet, but i can't wait to. the art looks great

Users browsing this forum: No registered users and 2 guests