I just didn't want to potentially derail the Hero thread, so I thought I'd start a new one.

In case you've missed out, 2046 is Wong Kar Wai's next film, which is currently in competition at Cannes. It's presumably being made as a sci-fi/romance film and a sequel to In The Mood For Love (but as anyone knows (especially the actors), nobody really knows what it's really about until WKW stops editing), and it looks as though some of the leftover footage from In The Mood For Love might actually be used in 2046.

As Kazu mentioned, 2046 boasts a lineup of the prettiest, and arguably some of the most talented actresses in Asian cinema at the moment.

Now might be a good time for me to mention that I used to have elaborate fantasies of Faye Wong as an adolecent...
Last edited by Kean on Tue May 18, 2004 7:48 pm, edited 1 time in total.
keaner.net
the secret friend society
Top

Yes, the most beautiful ladies in Asian cinema, but what makes them even more attractive is their incredible acting ability. Everyone on this film are amazing performers... and Tony Leung still gets my vote as coolest actor on the planet.

I sooooooo can't wait for this movie.
I am so happy to hear he finished it.
It'll probably screen in some festival over here too ...
we'll have to keep our eyes open ..

Looking forward to it!

I can't wait for this, in the mood for love is one of the best shot films ever!!
Top

Rumour on the street is that the release date for 2046 in Hong Kong / China / Taiwan is set for the end of September (which is like, this month!). Whether that actually happens is another matter entirely...

And some video footage! Various clips from trailers and interviews about the film are collected on Lossless.blogs.com.
keaner.net
the secret friend society
Top

I know! It's been sooo hard abstaining from viewing the trailer or to many promotional stills. But soon House of Flying Daggers will come and I'm hoping that will tide me over until 2046.

Oh god this looks so so so awesome!! I love Chinese Mafia genres (I mean, it looks kiiinda 1920's Chinese mafia)! Tony Leung is so hot. And Gong Li's in it!!! Oh my gosh oh my gosh.
- Clio

I can't take it either!! I was (I still am, actually) so upset when I couldn't snag any tickets for Eros at the film fest (WKW directed the first of the three short films in the movie)...

Hmm I'm so jealous of Torontonians for having such a brilliant film festival! I think it's the only major one that's open to the public, too.

2046 looks quite interesting. I don't exactly get what about it is "sci-fi" though.
@rumrug
neilcomics.com
Top

Gah! Editing for 2046 is finished. Finished!! The HK release date is set for Sept. 29. The poster looks great: 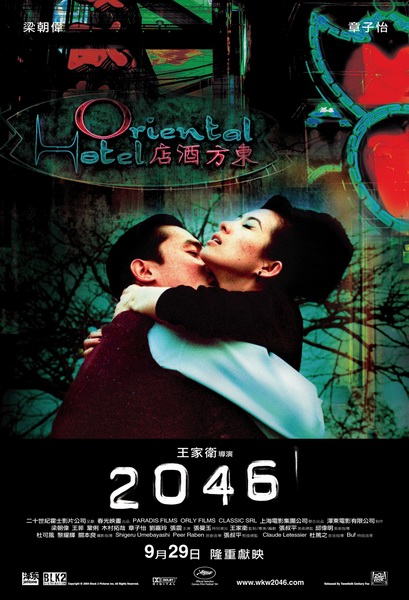 (Neil, this should explain the sci-fi bent to the story, and Clio... you've seen In The Mood For Love already, right?)
keaner.net
the secret friend society
Top

Ah, the link wasn't working for me, but Kazu showed me a flash animation ad for the movie where I could read the word "android" in Japanese. Intriguing!
@rumrug
neilcomics.com
Top

Users browsing this forum: No registered users and 16 guests