by Harry Myland (IV)
Anyone going to SPX? Me and my fellow comic pal Josh Hechinger will be, and I was curious to see if anyone from these happenin' forums are too. I hear SPX is a real laid back, fun con. So you should come if you can, and have fun, and be laid back and junk.

Here's the website if you're unaware or interested in this hip indie con: http://www.spxpo.com/
by goRaina
Dave and I will be there with the Comics Bakery! http://www.comicsbakery.com
by Og
I'm goin'...
by Kid Galactus
I'm going... on a related note, anybody need/ok with having a roommate (hotelmate?) for the con?
by LetsMeetUpInParadise240
I'ma going!

by Chris Schweizer
I'm going... driving, actually, because the United merge screwed up my miles and Amtrak was sold out. So it's a thirteen hour car trip! Bleh.

I can't wait. Hey, have they announced the Ignatz nominees? The show's only a month away.
by Joey
I'll be there! I just ordered more copies of Tales of Unusual Circumstance for the show, and in the week or two I'll be putting together more Cavemen in Space minis. I'll also have plenty of The Ride Home and I think one copy of Flight 5 in case anyone here hasn't picked THAT up yet!

I'll be sharing some tables with Drew Weing, (hopefully) Patrick Dean, and David Yoder, and maybe some other cool folks. David should have copies of his new Elephano anthology, which is shaping up to be a realllly nice book. I'll post more on that later...
by Harry Myland (IV)

Chris Schweizer wrote:I'm going... driving, actually, because the United merge screwed up my miles and Amtrak was sold out. So it's a thirteen hour car trip! Bleh.

Yikes! And I thought my 2 and a half hour drive was going to be a chore!

Hopefully see some of you cool cats there.

Not that SPX is all that pricy - for what you're getting (a very secific target audience, if you make the sorts of comics that the attendees like) - though I've heard MOCCA is actually cheaper. Is that true? I know I spent way more at Mocca, but that's probably because the city is so much more expensive.
by thedeafguy
I wish I had gone to Mocca...oh well. next time.

As for SPX...i'm hoping there's going to be a bit more people than Fluke...
by Joey

thedeafguy wrote:I wish I had gone to Mocca...oh well. next time.

As for SPX...i'm hoping there's going to be a bit more people than Fluke...

I'll be at table B1-2 with Michele Chidester, David Yoder, Drew Weing, and hopefully others! We'll be right around the corner (and across the aisle) from Oni, and right next to some fellow SCAD students Falynn Koch and Pranus Navjokaitis! 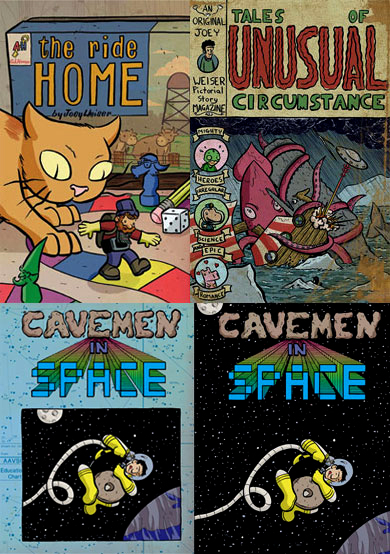 I will have the same offerings that I had at MoCCA -- The Ride Home, Tales of Unusual Circumstance, and the Cavemen in Space mini-comic. And debuting at the show is....

The Elephano Anthology!!! You may have heard about this book last year when David Yoder (who partially conceived this project, and is the head dude over the thing) was dashing around like a madman inviting contributors and spreading the word... Well, the book is scheduled to be out and available at the show! From what I've seen this book is gonna be pretty awesome...I don't have a full list of cartoonists in the book, but I can throw a few out there: David Yoder, Joey Weiser (me!), Jason Rainey, Douglas Frey, JP Coovert!

So yeah, I have a new story in that, based off of my own personal experience working in a magic shop while I was in Savannah... Come by the table and say "hi!"
by Chris Schweizer

thedeafguy wrote:I wish I had gone to Mocca...oh well. next time.

As for SPX...i'm hoping there's going to be a bit more people than Fluke...

Hey, Tyler, you're taking Amtrak, right? Allen and I are both, it turns out, on the Thursday night train; if you're on it, too, we'll buddy up in the dining car!
by thedeafguy
I believe my train is on Friday night. I'll be arriving into DC on Saturday about around 10am-ish.

last time...got into trouble for trying to get into the wrong...car. heh.

see you there.
by Harry Myland (IV)
SPX was super fun and I am so going back next year - it was nice meeting some of you too!
by thedeafguy
had a blast in DC, saw some old friends and made some new friends. highly recommendable. Next time, I'm getting myself a table!
All times are UTC-07:00
Page 1 of 1
Powered by phpBB® Forum Software © phpBB Limited
https://www.phpbb.com/